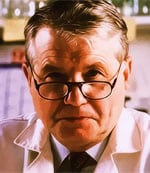 Dr. Montagnier is a French virologist and joint recipient with Francoise Barru-Sinoussi and Harald zur Hausen of the 2008 Nobel Prize in Physiology or Medicine for his discovery of the human immunodeficiency virus (HIV).

A long-time researcher at the Pasteur Institute in Paris, France, he currently works as a full-time professor at Shanghai Jiaotong University in China.

In 2009, Montagnier published two controversial research studies that some homeopaths claimed as support for homeopathy. Although Montagnier disputed any such support, many scientists greeted his claims with scorn and harsh criticism.

The 2008 Nobel Prize in Physiology or Medicine was awarded to Montagnier and Francoise Barru-Sinoussi for the discovery of HIV. They shared the Prize with Harald zur Hausen, who discovered that human papilloma viruses can cause cervical cancer. Montagnier said he was “surprised” that Robert Gallo was not also recognized by the Nobel Committee: “It was important to prove that HIV was the cause of AIDS, and Gallo had a very important role in that. I’m very sorry for Robert Gallo.” According to Maria Masucci, a member of the Nobel Assembly, “there was no doubt as to who made the fundamental discoveries.”

Montagnier is the co-founder of the World Foundation for AIDS Research and Prevention and co-directs the Program for International Viral Collaboration. He is the founder and a former president of the Houston-based World Foundation for Medical Research and Prevention. He has received more than 20 major awards, including the Legion d’honneur (Commandeur in 1994; Grand Officier in 2009), the Lasker Award (1986), the Gairdner Award (1987), King Faisal Foundation International Prize (1993) (known as the Arab Nobel Prize), and the Prince of Asturias Award (2000). He is also a member of the Academie Nationale de Medecine.

Research on electromagnetic signals from DNA

In 2009, Montagnier published two controversial research studies which, if true, “would be the most significant experiments performed in the past 90 years, demanding re-evaluation of the whole conceptual framework of modern chemistry.”

They were published in a new journal of which he is chairman of the editorial board, allegedly detecting electromagnetic signals from bacterial DNA (M. pirum and E. coli) in water that had been prepared using agitation and high dilutions, and similar research on electromagnetic detection of HIV DNA in the blood of AIDS patients treated by antiretroviral therapy.

On 28 June 2010, Montagnier spoke at the Lindau Nobel laureate meeting in Germany, “where 60 Nobel prize winners had gathered, along with 700 other scientists, to discuss the latest breakthroughs in medicine, chemistry and physics.” He “stunned his colleagues….when he presented a new method for detecting viral infections that bore close parallels to the basic tenets of homeopathy. Although fellow Nobel prize winners who view homeopathy as quackery were left openly shaking their heads, Montagnier’s comments were rapidly embraced by homeopaths eager for greater credibility….Cristal Sumner, of the British Homeopathic Association, said Montagnier’s work gave homeopathy ‘a true scientific ethos’.”

When asked by Canada’s CBC Marketplace program if his work was indeed a theoretical basis for homeopathy as homeopaths had claimed, Montagnier replied that one “cannot extrapolate it to the products used in homeopathy”.

While homeopaths claim his research as support for homeopathy, many scientists have greeted it with scorn and harsh criticism.

On 14 September 2009, Louise Mclean posted on the “Homeopathy World Community” website: “Luc Montagnier Foundation Proves Homeopathy Works”, and on 6 October 2009, homeopathic promoter Dana Ullman responded to a criticism of homeopathy by writing: “And I assume that you all have seen the new research by Nobel Prize-winning virologist Luc Montagnier that provides significant support to homeopathy.” (On 30 January 2011, Ullman responded to Montagnier’s comment on “homeopathy” and “high dilutions” in his 24 December 2010 Science interview by writing an article entitled “Luc Montagnier, Nobel Prize Winner, Takes Homeopathy Seriously”. In the article he repeated his claim’s that Montagnier’s studies supported homeopathy.

Criticism of the claims of homeopaths followed:

On 20 October 2010, Harriet A. Hall responded specifically to these claims by homeopaths: “Nope. Sorry, guys. It doesn’t. In fact, its findings are inconsistent with homeopathic theory… Homeopaths who believe Montagnier’s study supports homeopathy are only demonstrating their enormous capacity for self-deception.” She went on to analyze the studies and pointed out a number of flaws, stating: “…even assuming the results are valid, they tend to discredit homeopathy, not support it…Homeopathy is a system of clinical treatment that can only be validated by in vivo clinical trials.”

In a 24 December 2010 Science magazine interview entitled “French Nobelist Escapes â€˜Intellectual Terrorâ€™ to Pursue Radical Ideas in China”, he was questioned about his research and plans. In the interview he stated that Jacques Benveniste, whose controversial homeopathic work had been discredited, was “a modern Galileo”. When asked if he wasn’t “worried that your colleagues will think you have drifted into pseudo-science?”, he replied “No, because it’s not pseudoscience. It’s not quackery. These are real phenomena which deserve further study.” He also mentioned that his applications for funding had been turned down and that he was leaving his home country to set up shop in China so he could escape what he called the “intellectual terror” which he had been told had prevented others from publishing their results. He believes that China’s Jiaotong University is more “open minded” to his research. There he is chairman of the editorial board of a new journal which publishes his research.

He was also questioned on his beliefs about homeopathy, to which he replied: “I canâ€™t say that homeopathy is right in everything. What I can say now is that the high dilutions are right. High dilutions of something are not nothing. They are water structures which mimic the original molecules.” He did admit that he wasn’t working with the very high dilution levels normally used in homeopathy: “We ï¬nd that with DNA, we cannot work at the extremely high dilutions used in homeopathy; we cannot go further than a 10âˆ’18 dilution, or we lose the signal. But even at 10ˆ18, you can calculate that there is not a single molecule of DNA left. And yet we detect a signal.”

A 12 January 2011 New Scientist editorial described the controversial nature of the research, while also noting how many researchers “reacted with disbelief”, with Gary Schuster comparing it to “pathological science.”[3] Biology professor PZ Myers also described it as “pathological science.” He described the paper as “one of the more unprofessional write-ups I’ve ever run across”, and criticized the publication process as having an “unbelievable turnaround” time: “another suspicious sign are the dates. This paper was submitted on 3 January 2009, revised on 5 January 2009, and accepted on 6 January 2009,” leading him to ask: “Who reviewed this, the author’s mother? Maybe someone even closer. Guess who the chairman of the editorial board is: Luc Montagnier.”

On 25 May 2012, he gave the keynote address at the 2012 AutismOne conference in Chicago. Similar to the controversy he aroused by extolling homeopathy, his latest group, Chronimed, claims to have made a discovery for autistic children that was sharply criticized by scientist Dr. Steven Salzberg.

In 2009, Montagnier became involved in a legal battle with inventor Bruno Robert over the intellectual property rights to the techniques used in the aforementioned research. Robert, who had tried to succeed the company Digibio created by the late Jacques Benveniste, approached Montagnier in May 2005 regarding his work on electromagnetic signals. In November 2005, Robert registered a patent for the process of homing in on a “biochemical element presenting a biological activity through the analysis of low-frequency electromagnetic signals.” This patent was in fact written by Montagnier from results obtained between July and November 2005. A month later, INPI, France’s patents body, received a request for the same patent from Montagnier,which was criticized by the patent examiner on multiple points, including this one:

“…the invention is based on phenomena which contradict the fundamental principle of physics and of chemistry, i.e. the existence of biological or effect without an active molecule and no explanation or theoretical basis makes it impossible at the current time to explain the results obtained.”

Montagnier took Robert to court, claiming that he had intellectual property rights over this process. However, Robert’s lawyer alleged that Montagnier had already admitted that he had not come up with the discovery, as he had signed a contract to use Robert’s technique in 2005. In response, Montagnier’s lawyer said the pair had only signed a “protocol agreement” which was not legally binding.

In July 2009, the court ruled that Robert’s 2005 patent application was ‘fraudulent’, because it had subtracted all of Montagnier’s contribution, which the court estimated at 50%.