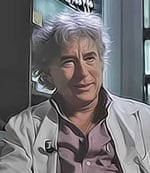 Massimo Citro, M.D., is a medical doctor specializing in psychotherapy and the discoverer of pharmacological frequency transfer (TFF).

He is a member of the Club of Budapest, is the founder and director of the Alberto Sorti Research Institute (IDRAS), and also has a degree in literature.

Convinced homeopath, makes research in the field of non-toxic pharmacological methods, free of side effects and health have always been respectful of the. But few know that Dr.. Citro was one of the early pioneers in the study on Italian food intolerance test through resonance, subject that he recently spoke at the conference The medicine that heals.

Medicine for his research on transfer frequential (TFF) are probably the result of favorable experimental findings that led him towards a much discussed and chat by colleagues from traditional medicine, but he tells heavily and outspoken denouncing a total and expanded educational status of ignorance that does not bring some pride to the entire medical profession.

You can evaluate his research means this movie one of the recent report on Rai2 (The verifier for) that you will find (from 30 th minute onwards).

To the question what are the differences between allergies and intolerances, and why there is so much confusion in the medical field, lui need:

Behind every allergy, as the root cause, there is always at least one food intolerance latent. The allergen is only the last link in the chain: the match that lights the purification process by the accumulation of toxic substances.

The allergy is mediated by cells and antibodies that react immediately to the intrusion of an allergen, creating a relationship of cause and effect immediately.

All this is missing intolerance, which instead is the inability to metabolize a given substance, then it accumulates in the body, which, soon as he can, trigger reactions elimination of toxins (in the form of secretions) or combustion (with inflammation) or in combination of the two (in the form of allergic reactions).

The confusion that exists in the medical field derives first of all because you are using incorrect terminology.

In celiac disease, for example, is an allergy, not an intolerance and there is a big difference between a celiac and a gluten-intolerant!

Also, still, some colleagues are bent on denying the existence of intolerance (known to medicine since the time of Hippocrates) and despite the evidence of diagnostic and therapeutic experiences and results achieved in this field in more than half a century of experimentation in many European countries.

Such as methods for diagnosing allergies?

The only truly effective ones are those based on the principle of resonance between the frequencies emitted by the sample of the food and those radiated by the patient. Measurable with electroacupuncture devices or test kinesiological.

Many times, but not always, some cytotoxicity test is reliable blood lymphocytes. Of course you can not test an intolerance with their methods of allergies, would be like trying to measure a distance employing the balance.

What are the most common diseases related to or caused by food intolerances?

– All allergies, a breath of skin, to any allergen.

– Most of the skin diseases and autoimmune diseases.

– Growth slowed, weight variations unjustified (such as increased weight loss and how).

Most of the diseases is treatable and most of the times resolvable, identifying the specific intolerances and refrain absolutely from those foods.

Massimo Citro, while going against the current and in contrast with most accredited medical theories, decided to prove that, behind the expensive traditional pharmaceutical research, there is a medicine healthier, ethics and less invasive than the whole of humanity deserves to know and be able to choose.

Massimo Citro is also the author of literary essays and scientific, published:

The Basic Code of the Universe (Inner Traditions, USA, 2011).

The Science of the Invisible (Macro, 2011) Coauthors, with Masaru Emoto.