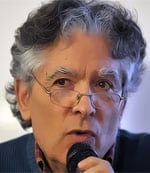 The experimental conditions by which electromagnetic signals (EMS) of low frequency can be emitted by diluted aqueous solutions of some bacterial and viral DNAs are described. That the recorded EMS and nanostructures induced in water carry the DNA information (sequence) is shown by retrieval of that same DNA by classical PCR amplification using the TAQ polymerase, including both primers and nucleotides.

Moreover, such a transduction process has also been observed in living human cells exposed to EMS irradiation.

These experiments suggest that coherent long range molecular interaction must be at work in water so to allow the observed features. The quantum field theory analysis of the phenomenon is presented.

In every living being and organism there is an entire world as amazing as the one we see around us. In our body there are 100 trillion cells (1012), and DNA that extends 10,000 kilometers. The base pairs in our DNA are held together by hydrogen. Maybe the hydrogen bonds in DNA´s base pairs that constitutes our immune system and our consciousness.

There is water in the cells, and between them, and while large molecules have to go through membrane proteins to enter the cells, small molecules like H2O and O2 can pass through the cell membrane without difficulty. In the spaces between the brain cells, at the end of every neuron, the basic unit of a brain cell is synapses, where chemical charges build up.

In the same space dendrites – tiny filaments of nerve endings communicate with other neurons, sending out and receiving their own electrical wave impulses. This, together with the quantum hologram and non-local consciousness, provides an explanation and an exciting developmental phase in the illusion in which we live.